Themis Prodromakis, Professor of Nanotechnology at the University of Southampton and PI of FORTE, has received prestigious recognition from the 2021 Blavatnik Awards for Young Scientists in the UK.

Professor Prodromakis, Director of the Centre for Electronics Frontiers in the University’s Zepler Institute for Photonics and Nanoelectronics has been selected as a Finalist in the category of ‘Physical Sciences and Engineering’ and will receive £23,000.

This award recognises his contributions in devising new computer hardware to support the rapidly increasing computational demands of AI applications. His transformative technology is built upon an electronic component known as a Memristor, which simultaneously stores multiple datasets in a single component.

Professor Prodromakis, who holds a Royal Academy of Engineering Chair in Emerging Technologies, said: "The invention of the transistor and integrated circuits have over the past seven decades transformed our world. Sustaining modern societal needs requires a fundamental re-think of electronics and Memristors promise to bring this change about. I am truly honoured that the contributions of my team and collaborators are recognised with this prestigious award." 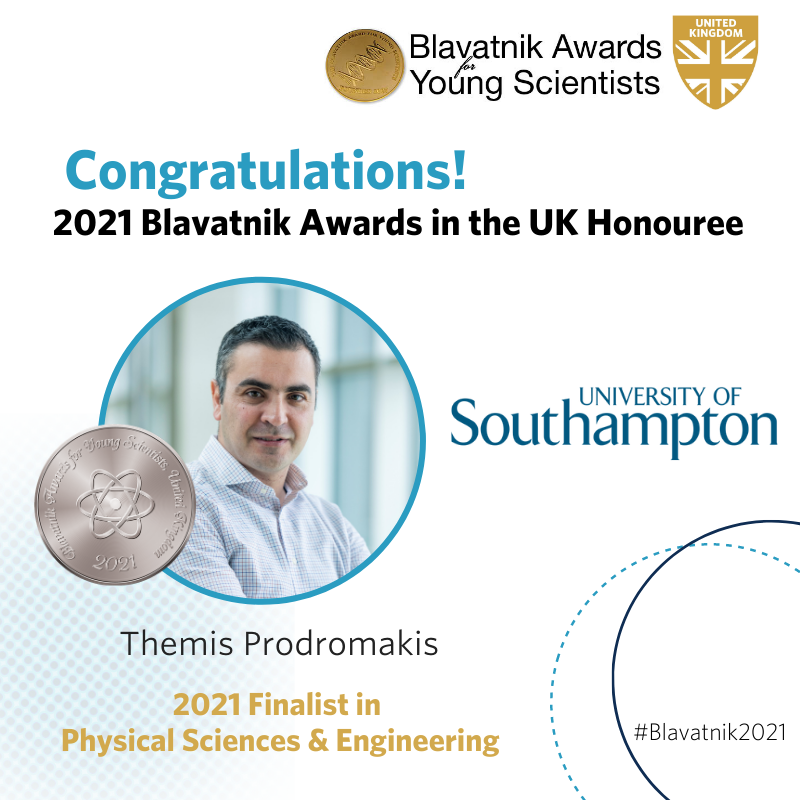 The Awards, announced by the Blavatnik Family Foundation and the New York Academy of Sciences, provide the largest cash prize available to scientists aged 42 or younger. They comprise of three Laureates, who this year each receive £76,000 and two Finalists in each of the three categories of Life Sciences, Physical Sciences and Engineering, and Chemistry – each receiving £23,000.

“The UK has always been recognised and admired for its scientific excellence,” commented Sir Leonard Blavatnik, Founder and Chairman of Access Industries, head of the Blavatnik Family Foundation, and member of the President’s Council of the New York Academy of Sciences. “Each of this year’s Blavatnik Award honourees is a rising star in their respective fields and it is a great pleasure to give them the global recognition they so richly deserve.

The 2021 Blavatnik Awards in the UK Laureates and Finalists will be honoured (pandemic restrictions allowing) at a ceremony in London, tentatively scheduled for 8th June 2021. The following day, the honourees will present their research with a series of short, interactive lectures at a free public symposium, “Innovating for a Better Future: 9 Young Scientists Transforming our World.”

Jan 05, 2021
Nicholas Dirks president and CEO of The New York Academy of Sciences highlights the work of FORTE PI
NEWS